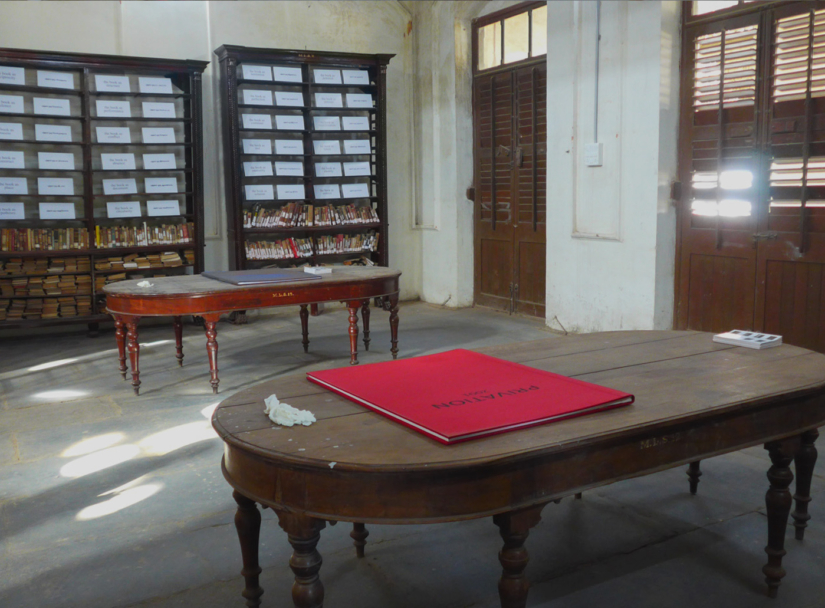 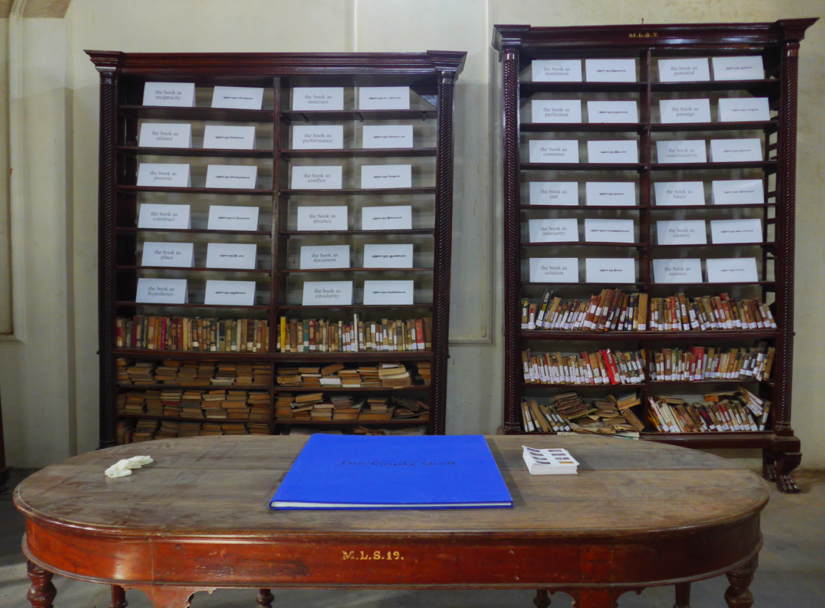 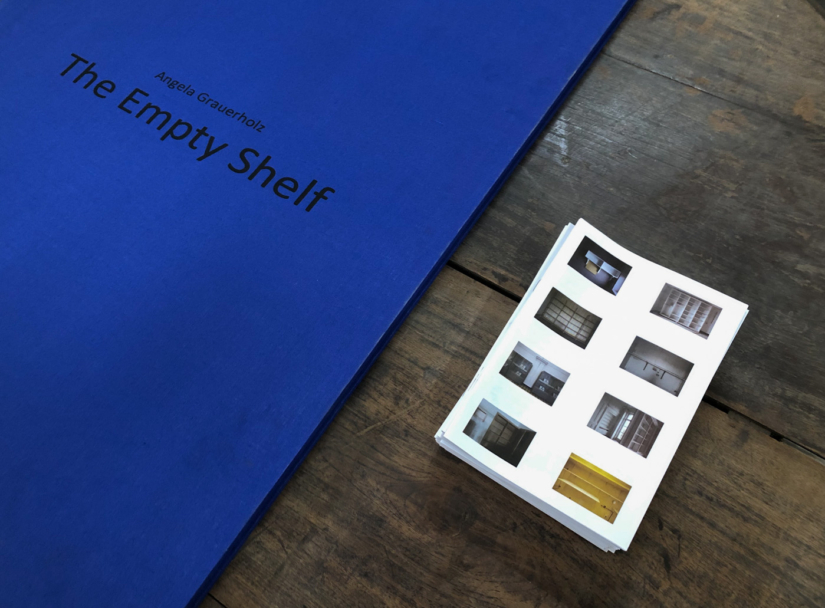 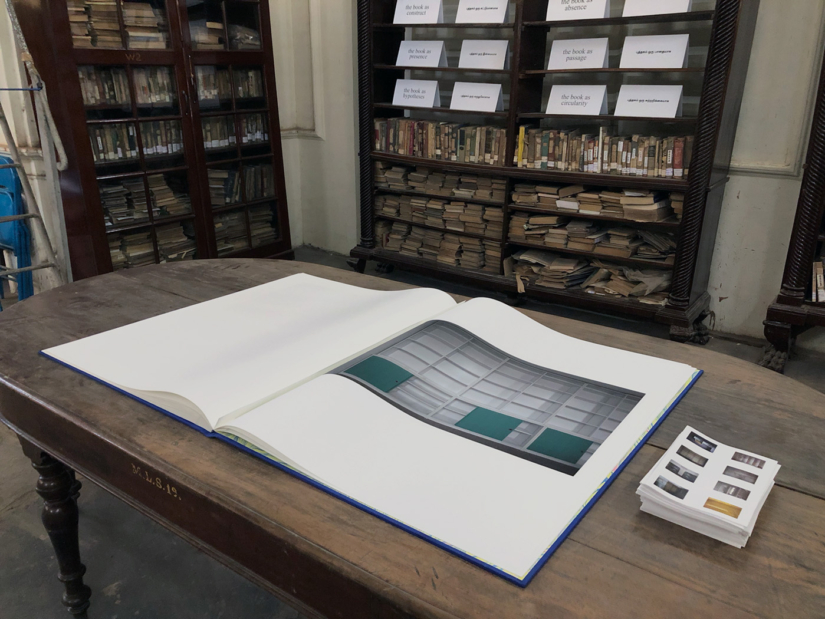 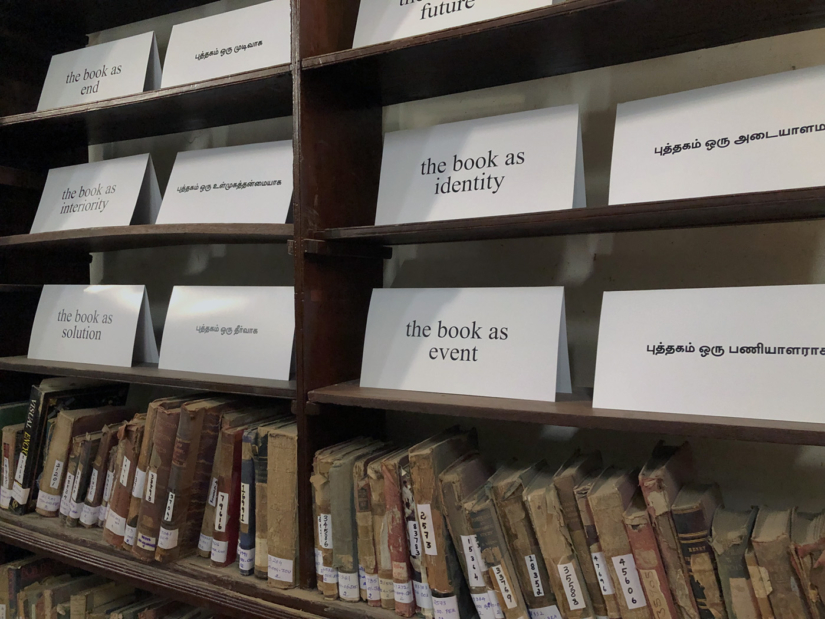 A selection of texts in English and Tamil on tent cards 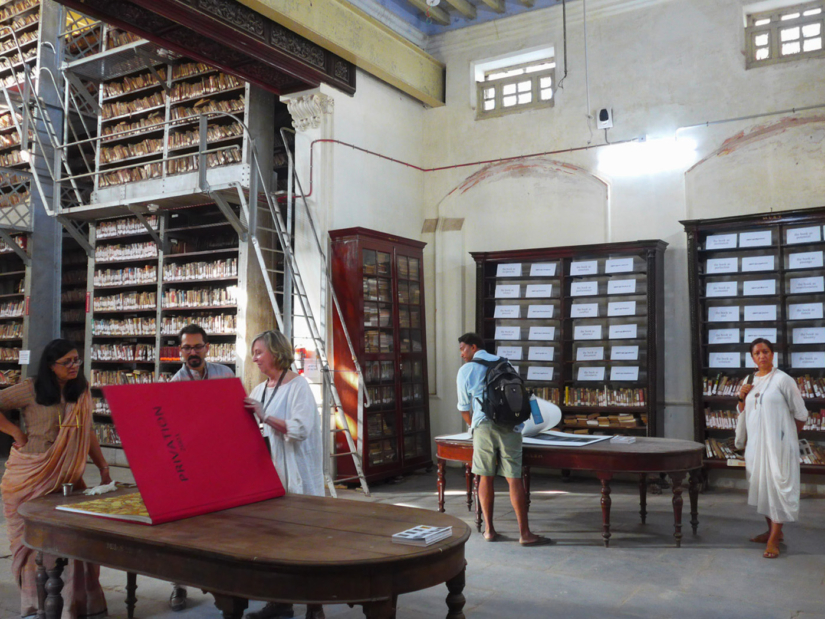 The book is the Book, an introduction
Installation at the Madras Literary Society, Chennai
Chennai Photo Biennale 2019 (February 22-March 24)

The images of empty shelves reproduced here are souvenirs of what the visitor of the exhibition at the Madras Literary Society (Chennai Photo Biennale 2019) encounters in the form of a large book.* This booklet is meant to help the visitor to connect the various elements and divine what is not said. I am of the mind that not everything in an artwork needs to be fully understood, and that some works should keep their secrets. In looking
at a photograph, we cannot know everything about it. As a photograph does not tell everything, and sometimes one can only sense that there is more to it than “meets the eye.”

In addition to the series of photographs of empty bookshelves, this booklet contains a number of phrases that introduce the range of conceptual possibilities the book as a cultural object offers, and an equal number of quotations taken from a text by Maurice Blanchot entitled The Absence of the Book.

Over the years, Blanchot’s writings have had a profound influence on my understanding of the relationship between literature and art making, and by the same token, the art of bookmaking. The association of art making and bookmaking is not accidental, as I have come to realize that these are two forms of articulating thought that represent the same kind of process to me, in the way that I think about creating, conceptualizing, and also spatializing an ‘integrated whole,’ in art making, in bookmaking, as well as in exhibition design. Text and image are often one and the same for me—especially poetic texts—in that they do not immediately reveal themselves completely to their readers and viewers. As it happens, Blanchot was deeply interested in a poet who has also inspired me, Stéphane Mallarmé, the French poet who gave us A throw of the dice will never abolish chance, the first modernist poem to introduce the possibility of text as visual language.

Two texts by Blanchot were of special interest. In The Book to Come, we are invited to experience the book as something in a continual state of becoming. While the second, mentioned above, The Absence of the Book, navigates similar ideas, by focusing mainly on the absent and yet omnipresent book. At the moment, where the object of the book as such has been under tremendous threat, as online publications and the digitalization of whole libraries seem to suggest the imminent demise of the book as we know it, we are unable to predict what is going to happen. At the same time, more and more printed books of all kinds appear on the market, so one prediction seems no more plausible than another.

My first photograph of an empty shelf was taken in a small defunct library in Nogent-sur-Marne near Paris. All the shelves were full, but one. I realized that this image of empty shelves was one possible vision of the future, in as much as the shelves stuffed with old magazines and crumbling books that would never be read again meant that they were in effect past their due date. There was a certain beauty in this realization, because the end of something is only natural, and I do believe that every photograph contains a memory of a past event, but also a memory of a future: the possibility for future images as we have imagined them many times before.

The book is the Book