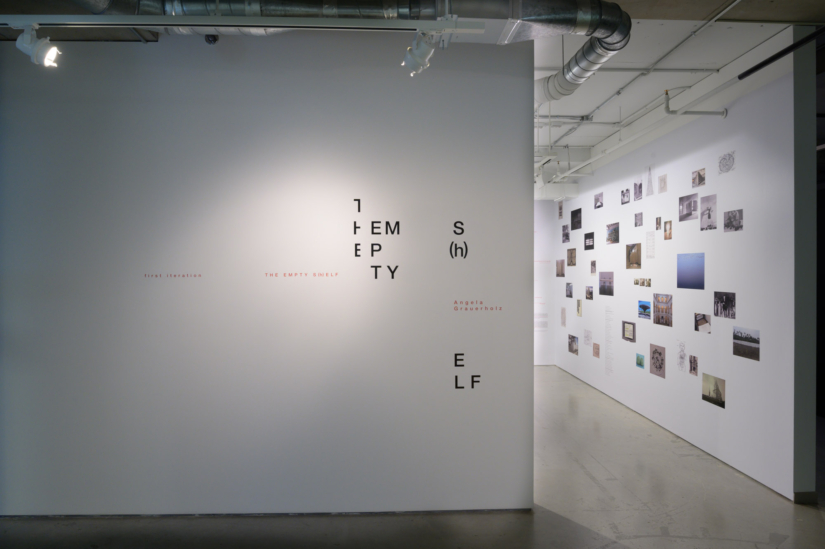 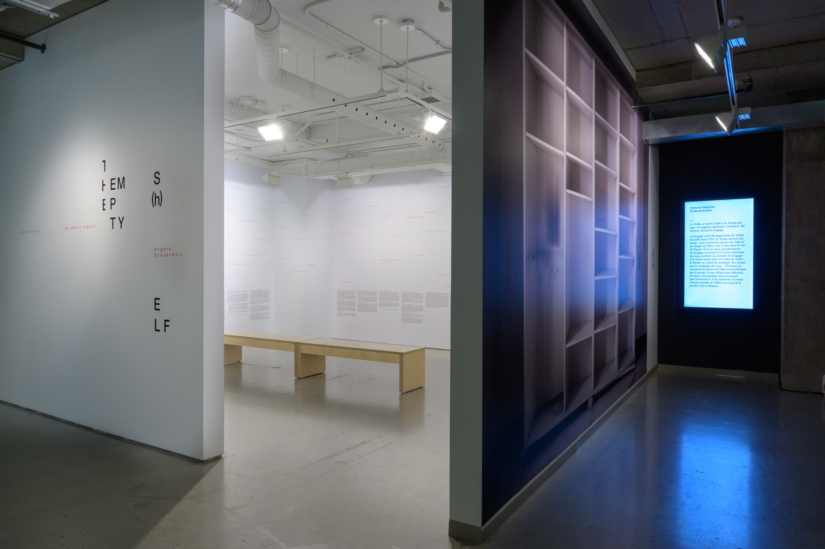 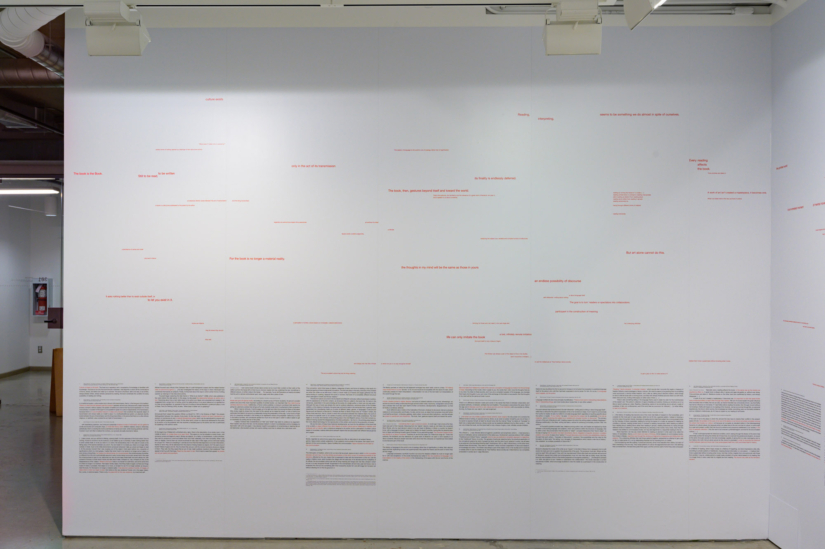 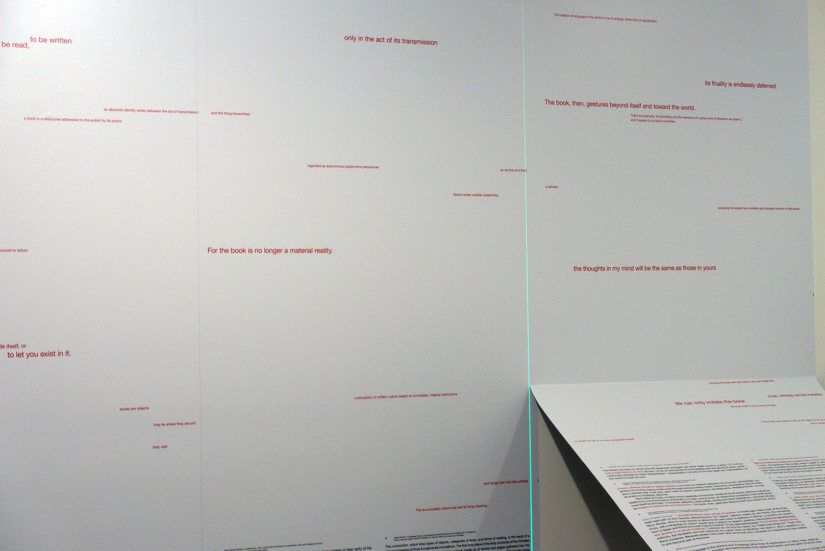 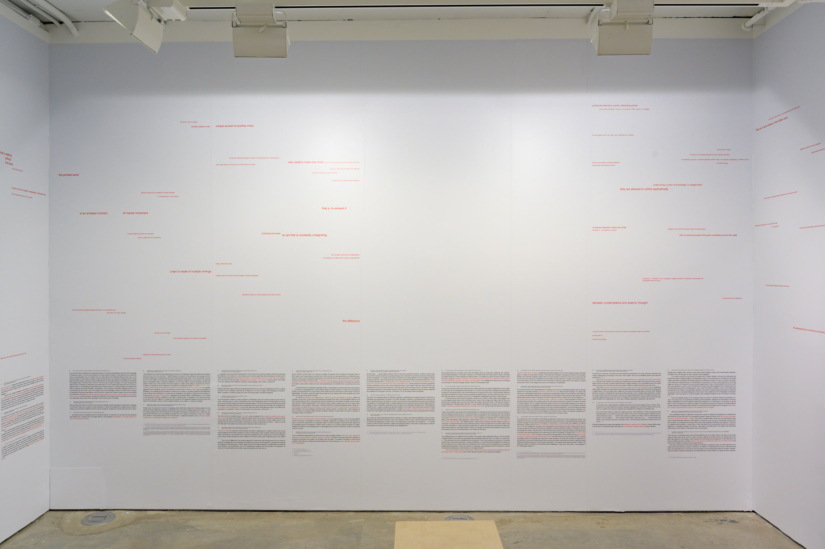 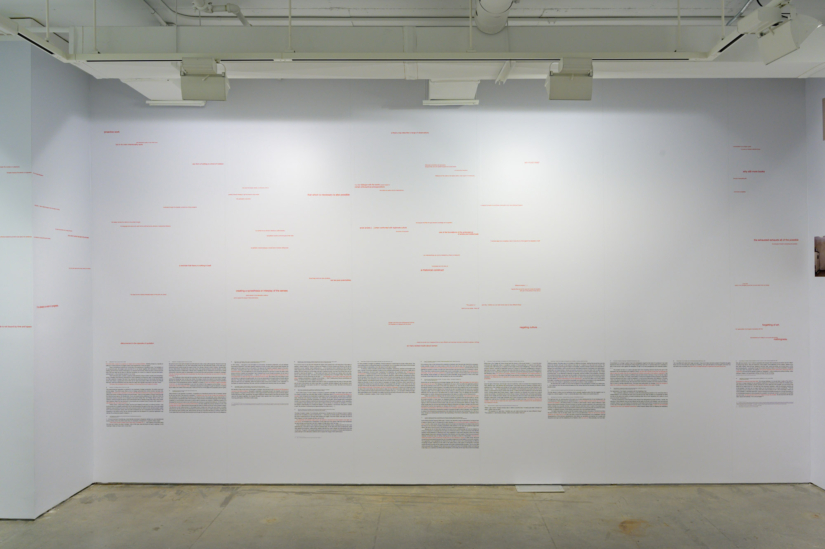 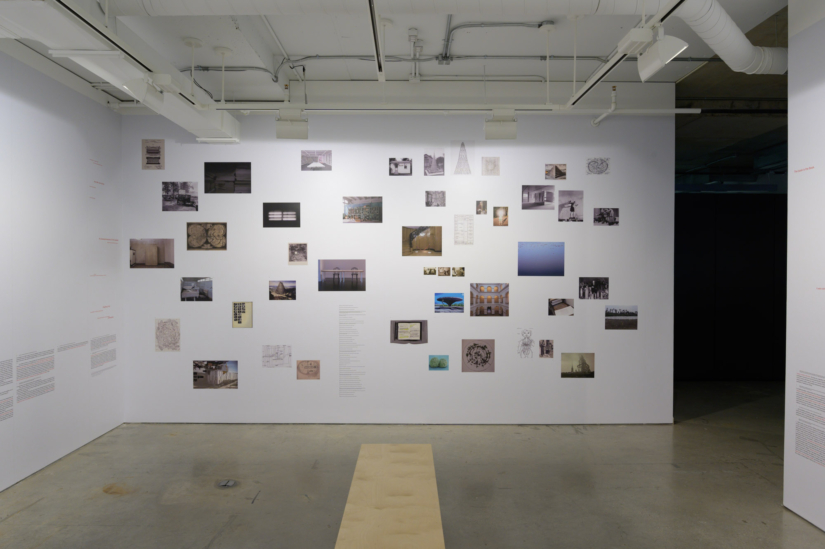 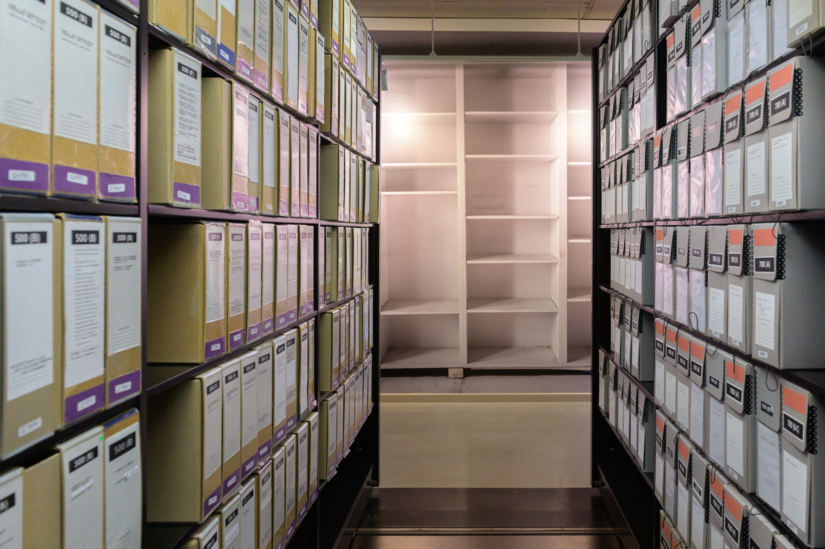 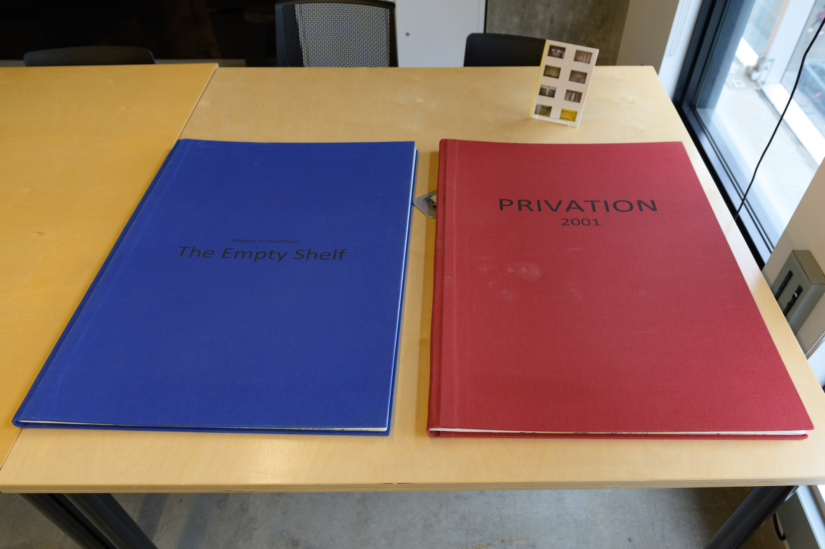 The book is the Book, produced for the 2019 Chennai Photography Biennale, and a second brochure produced earlier that year, From Circle to Ellipse, 2019. The original was conceived for the Nexus Network Journal in 2010. It serves here to contextualize the use of footnotes prior to the installation at Artexte.

Introduction to The Empty S(h)elf

Benjamin, who for his entire life pursued the idea of writing a work made up exclusively of quotations, had understood that the authority invoked by the quotation is founded precisely on the destruction of the authority that is attributed to a certain text by its situation in the history of culture. Its truth content is a function of the uniqueness of its appearance, alienated from its living context in what Benjamin, in his “Theses on the Philosophy of History,” defines as “une citation à l’ordre du jour” (“a quotation on the order of the day”) on the day of the Last Judgment. The past can only be fixed in the image that appears once and for all in the instant of its alienation, just as a memory appears suddenly, as in a flash, in a moment of danger.
—Giorgio Agamben

In her discussion of photography, Susan Sontag draws a curious analogy between the non-linguistic property of the photographic image and the linguistic act of quotation. She writes, “Photographs—and quotations—seem, because they are taken to be pieces of reality, more authentic than extended literary narratives” (1973: 74). Sontag casually evokes this analogy as if the concept of “authenticity” implied in the photographic mode of inscription and the linguistic act of quotation needs no further explanation. If we follow Sontag, a photograph does not only signify, but it also presents itself as a special kind of inscription that reproduces and repeats the “real” or the “original.”
—Walter de Gruyter

Several years ago, in re-reading a passage of the Library of Babel by Jorge Luis Borges, an unusual expression caught my attention, namely the “continuous spine,” in this sentence: “Mystics claim that their ecstasies reveal to them a circular chamber containing an enormous circular book with a continuous spine that goes completely around the walls.” This somewhat absurd idea perfectly encapsulates the qualities I mean to bring to The Empty S(h)elf, implicitly alluding to the potential infinity as the essence of a book, as well as naming the symbolic value of the book as the vessel of knowledge and insight.

In this first iteration of The Empty S(h)elf, the allusion to the book is of course intentional, as the work takes the form of a spatialized text—introducing the notion of paratextual elements in the form of footnotes.1 While an actual text is absent and appears to have been replaced by a meta-layer of textual bits and pieces seemingly floating up from the footnotes, an alternative and somewhat abbreviated form of reading might be proposed here. One could be visually reminded of the famous poem by Stéphane Mallarmé, Un coup de dés jamais n’abolira le hazard, as well as his extensive writings toward the elaborate and “forever absent” book Le Livre—repeatedly and very beautifully discussed by Maurice Blanchot in The Book to Come (and others). Mallarmé’s work has fed our imagination and reflections on the potentiality of reading and writing for more than a hundred years.

While several aspects of The Empty S(h)elf are clearly similar to my earlier explorations in method and process (such as Reading Room for the Working Artist, 2003/2004), this work required the development of an entirely new archive of images and texts. Originally planned to have little imagery, I was fortunate to come upon situations in which I was able to photograph many shelves that had been emptied of their contents.2

In The Empty S(h)elf, the title’s play on words alludes to the fusing of two very different ideas: that of the empty library, a dystopian image of the future of the book; and that of the empty self, suggesting an individual’s inner void or absent self. However, to acknowledge the “construction” of self through—apart from experience, of course—reading, dialoguing, discourse or writing, and the “construction” of a book’s content through the very same activities, is to recognize or propose each entity to be additive and evolutive, in much the same way as the project as a whole will unfold over time—I am proposing about five iterations of The Empty S(h)elf.

This project began with one file from my last archive for Reading Room for the Working Artist. It grew steadily with the expansion of the archive to also accommodate the web piece www.atworkandplay (2009), and which consequently continued to grow, as it was becoming ever more important in my mind. This file—containing mostly texts (and some photos) from various authors exploring the idea of the lost or non-existent self (“Being No One”), autobiography, failing memory, self-consciousness, self-harm, nothingness and much more—now titled “The Empty Self,” was originally named after one of Beckett’s teleplays, “Not I” which was most amazingly interpreted on stage and on television by Billie Whitelaw, the British actor. So it was many years ago that I had my first impulse to investigate this notion of self, not identity—which is undeniably also part of it—but the idea of soul and self. Both expressions (or words), have been historically linked since the early Greeks, and we tend to nonchalantly put them out there without really questioning their origins or their very existence.

The idea for the play on words in the work’s title came quite early in the explorations for this piece, but it also grew out of an encounter with Dominique Scheffel-Dunand, then-director of the McLuhan Institute (now the McLuhan Centre for Culture and Technology at the University of Toronto). She was interested in finding alternative ways to construct an anthology of texts into a mosaic of quotations with papers from a conference celebrating Marshall McLuhan’s 100th birthday. We never found specific solutions to her proposal, but in reading several texts by and about McLuhan, I became interested in a particular academic language and the ways certain nascent aspects of theoretical developments or even models were expressed. This part of the project will be the subject of a future iteration of The Empty S(h)elf, as will be the actual discussion of the self where I intend to continue to address questions about the creative impulse and the need to learn and explore.

The words “writing” or “author” have become synonymous in my mind to “creating, making (art), thinking” etc. (same for author(ship), “originator, artist etc.”). There are big differences between how a critic or a writer talks about artwork, and for my part, I have found reading literary texts more stimulating and helpful when thinking and formulating works of art with textual and visual material. My first photograph of an empty shelf was taken in a library in Nogent-sur-Marne and in a way it gives a false impression, as all the other shelves were full. But what I had not realized then was that these images of empty shelves were one possible vision of the future, as much as the shelves stuffed with old magazines and crumbling books that would never be read again meant that they were in effect dead or should be. An empty shelf can be innocuous, but it can also be a foreboding image of what is to come.

To think of the archive as one image (or one text) composed of many led me to explore the possibilities of architectural structures to house photographic collections (Eclogue or Filling the Landscape, 1995; Aporia, 1995; and Sententia I-LXII, 1999), and eventually it seemed logical to draw an analogy to the book—its structure, form and content. But it was especially after the loss of my library due to a fire that I focused on the book as object (Privation, 2001) and as a space for mapping out ideas about the way we decipher the inner and outer world of an artwork. As a source of knowledge and as an art form, a book becomes as much a type of monument as a museum, a space one passes through and returns to.

My continuous interest in the way one authors a book and/or how one develops one’s own work in a changing landscape of institutions and in the digital age, are all part of this first iteration of The Empty S(h)elf. For me, making choices in my readings, observing what I pay attention to, choosing what to use in order to make a work is an act of formulation, of constructing thought and distinguishing what is different or important to me and what I wish to communicate. I have often felt that reading was a creative act in and of itself, a proposal I eventually found in Sartre, who made a similar claim.3

In much the same fashion, as impossible as it may be to determine which image in a mass of potential images can be considered significant today, one attempts and needs to make these choices all the time. This is perhaps the heart of the matter: a book or a work of art is a place where reader and writer (viewer and artist) encounter one another and the possibility for something to happen is given, and might continue to exist in the memory of those who have found themselves in that presence of the other, through a text, through a work of art. It is a situation where the possibility for an understanding, a meeting of minds, a reflection of one another’s interests, desires and fears has been opened up. This complex idea, one that our individuality might want to resist, is also reassuring, as it is one of those rare moments of knowing that we are not completely isolated in our thoughts, and that in trying to understand a particular problem or puzzling moment in art, we might just find ourselves.

1
I have used this gesture before, in a small text about the geometry of seeing. See Angela Grauerholz, “From circle to ellipse: footnotes to a photographic essay,” Nexus Network Journal (Architecture and Mathematics Online), ed. Robert Kirkbride, vol. 12, no. 3 (Turin: Kim Williams Books, 2010).

2
A first introduction of a large selection of these images of empty shelves was shown for the first time during the Chennai Photo Biennale in 2019. See “The Book is the Book,” text excerpts from The Absence of the Book by Maurice Blanchot, brochure accompanying the installation at the Madras Literary Society, Chennai Photo Biennale 2019 (available for consultation during the exhibition). Art 45 (Montréal) showed two examples of The Empty S(h)elf series in 2018.

The book is the Book